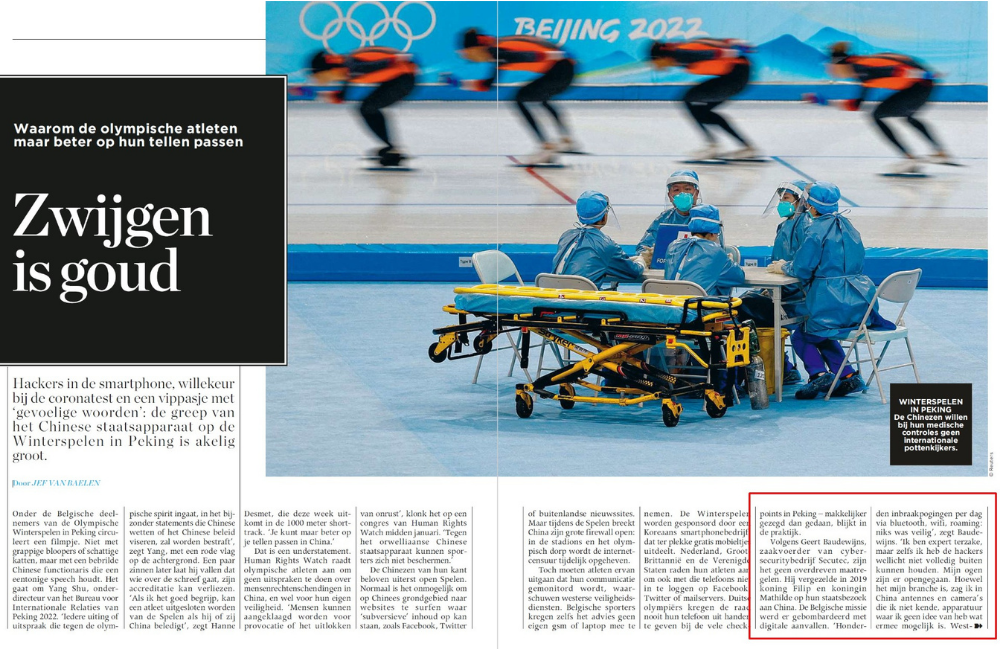 In an article in the Belgian news weekly, Knack, Secutec CEO and founder Geert Baudewijns warned against the risks of spying on athletes during the Winter Olympics in Beijing. Secutec provides tailor-made solutions for companies and governments who travel  to locations where data cannot be entirely secured.

On the Olympics, it was foreign security services who rang the bell on this a couple of months ago. Athletes were advised not to bring their own cell phone or laptop and to use  burner phones for the occation. Some countries went even further and even advised not to use these temporary devices to log on to social media or mail servers while in China. The news weekly Knack wrote an article on this issue titled “Silence is Gold” in its February 9, 2022 edition.

Below is a quote from that article:

“According to Geert Baudewijns, manager of cybersecurity company Secutec, these are not excessive measures. He accompanied [Belgian] King Philip and Queen Mathilde on their state visit to China in 2019. The Belgian mission there was bombarded with digital attacks. ‘Hundreds of break-in attempts a day via bluetooth, wifi, roaming: nothing was safe,’ says Baudewijns. ‘I’m an expert on the subject, but even I may not have been able to keep the hackers out completely. My eyes were opened over there. Although this is my profession, I noticed antennas and cameras in China that I did not know existed, equipment that I have no idea how far they can be used. Western Europe is lagging far behind. When you’re in Chinese territory, there’s not much you can do about this.’

Who was behind the attempted break-ins cannot be determined, but one can suspect in which corner the culprit is located. In retrospect, it was logical,’ says Geert Baudewijns. The king was accompanied by ministers and company managers. Important profiles with extremely valuable data. I even discarded my laptop and cell phone upon my return to Belgium and I can only hope that those people did the same.'”